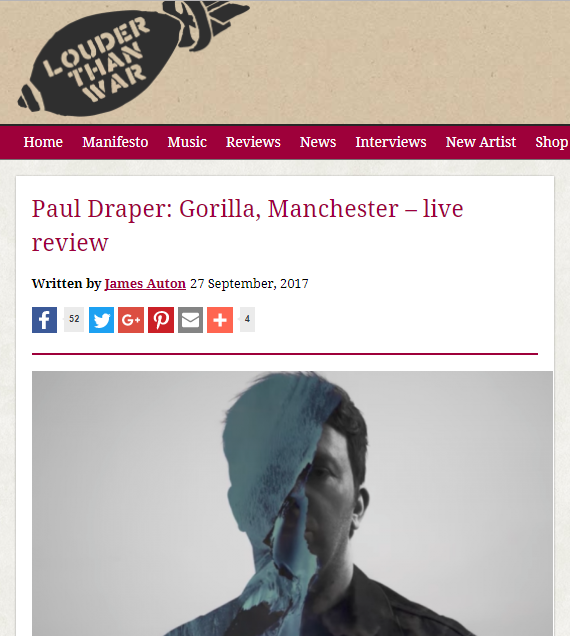 Louder Than War have given Paul another great review for his Manchester, Gorilla gig, saying he

‘has one of the greatest voices of his generation. And the next.‘

‘  If anything, ‘Feeling My Heart Run Slow’, ‘Things People Want’, ‘Friends Make The Worst Enemies’ and new single ‘Grey House’ are raised to a new level. Parallels are easily drawn between the songs on ‘Attack of the Grey Lantern’ and ‘Spooky Action’. On record they are synth lead, with a pop edge. Live, they are a new beast, Ben Sink’s guitar lines and Paul on rhythm adds meat to the bones but Catherine’s keys are vital to holding the songs together.

All the more impressive is Jon Barnett’s drumming on Feeling My Heart Run Slow, the broken up beats and constant changes in rhythm that are so essential in the original version are replicated and accentuated with a flourish that only great drummers can achieve.

The album is so strong that the anticipation for Mansun tracks is lower than you’d expect which means when the main set is closed by their biggest single, ‘I Can Only Disappoint You’ it is met with almost surprise, but no little joy, people all around singing themselves hoarse.

Perhaps the most famous Mansun track, ‘Wide Open Space’ brings the house down.’

Tickets are now on sale for a further fourteen gigs across the UK and Ireland  in February and March 2018.  Dates and venues are as follows:

You can read the full review HERE .